Interstate Engineering’s Board of Directors Expands by Two 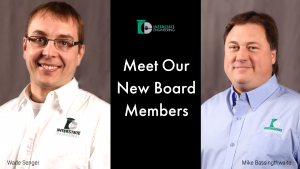 Interstate Engineering, Inc. has named Mike Bassingthwaite, PE, and Wade Senger, PE to their Board of Directors. Bassingthwaite will serve as Treasurer and Senger will serve on the board as Corporate Secretary.

Bassingthwaite, based out of Interstate Engineering’s Wahpeton office, has been part of the team since 1997. Recently serving as Wahpeton Office Manager and Eastern Regional Vice President, he has a strong background in county work, with an emphasis on hydrologic and hydrology. His experience as an office manager, regional leader, and client liaison brings value and knowledge to the board. He has implemented innovative ideas in the region and will continue to do so in his role on the board.

Senger, based in Jamestown, is the East Central Regional Vice President. He has been with Interstate Engineering since January 2010. Working extensively with rural water and municipal clients, Wade has an approach to work that is steady, cost conscience, and innovative. Never shying away from a challenge, Senger has approached his managerial role in a straightforward and purposeful way. His ability to look to a bigger picture and how new approaches can bring positive change will benefit the board structure, the company, and clients.

Other members of the Interstate Engineering Board of Directors include Chairman of the Board Damon DeVillers, PE; President Lonni Fleck, PE, LSI; and Vice-President Travis Dillman.